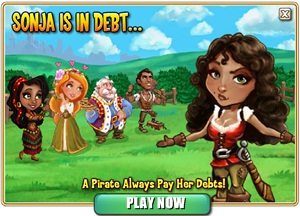 Sonja is in debt! as Zynga’s Castleville is set to release this mission as players will help Sonja pay off her dues in Castleville A Pirate’s Debt Quest. It’s a seven part mission plus a bonus one. There a couple of crafting here in this quests so we better prepare the ingredients that we will be using for the recipe. Players who are from 16 and above will automatically receive this quest once it is released.

– It was mighty kind of Yvette to patch my sail with her petticoat!

– It’s the Pirate Code! I’ve got to find a way to repay Rafael for coming to my rescue when the storm sunk my ship. But how?

Place 6 Trees for Rafael to chop

– How can I repay Alastair for his fancy hocus-pocus fending off the Beasties? Got any grand ideas?

– The Duke was a big help when my ship went down so the least we can do is cook him up a big feast! Pirate style!

Quest 5: Castleville Something for Everyone!

– It’s the Pirate’s Way to help them that help you.

Craft 5 Cotton Cloths so George can dry himself off

Quest 6: Castleville This is FashionVille!

– I’ve got Izadora to thank for my fancy new pirate garb.

Craft 3 Dye Kits to give the leather some pizzazz

Quest 7: Castleville Cook it Off!

– Aye, it makes a pirate proud to have a good friend like Mia.

Have 10 Bottles of Milk

Quest 8: Castleville A Pirate in Debt

– A surprise dinner for me! Thrown… by… EVERYONE?! But my debts..