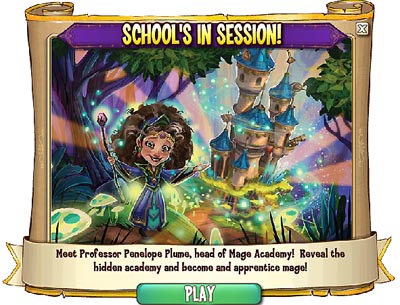 A new NPC will be arriving in Castleville Mage Academy Revealed as Professor Penelope Plume will be introduced with a new questline. The mission will require players to save the Academy by performing and finishing seven part of quest on which each quest will have three tasks. There are some Spell Book that will be used for this mission so it will be wise to at he ingredients for the spells.

Quest 1: Castleville Up Hill Both Ways

Explore the site of the Mage Academy

Have Dew Drops (ask your friends for some Dew Drops)

Quest 3: Castleville From the Ground Up

Cast the Sight Unseen Spell Level I on the Mage Academy

Repair the first stage of the Founder’s Statue

Have 5 Walls in your Kingdom

Complete stage 2 of the Founder’s Statue

Complete the final stage of the Founder’s Statue