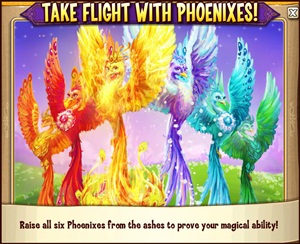 Castleville take flight with Phoenix has just been released! Players will now have the chance to complete the Castleville Phoenix Rising Quests. Sal will be hosting this one as we will be using our spell book once again and start crafting several spells including the Sunripen Spell and Falling Star Spell. So let’s start raising some cool Phoenix.

– It is not every day when a Master Wizard asks you to bring an extinct species back to life. Try not to mess up.

Place the Phoenix Nest in your Kingdom

Have 1 Fire Burner in your Kingdom

– Handling a Phoenix takes special care. Try not to burn all your hair off. Apes look funny without hair. Just ask Al.

Have a Medium Phoenix in your Kingdom

– Keep feeding a small Phoenix to help them become a medium Phoenix.

– If you think I am difficult now, just wait until I go a day without my beauty sleep. Keep that Phoenix QUIET!

Start 3 new Phoenixes to raise out of your Phoenix Nest

– Click on the Phoenix Nest to start a new Phoenix.

– Phoenix Feed can be crafted by clicking on a growing Phoenix.

– When it comes to wizards, only the best of the best can raise a Phoenix. Prove to me you have what it takes.

– Phoenix Feed can be crafted by clicking on a growing Phoenix.

– If the Phoenix has truly chosen you, then you should be able to craft the mark of their favor: a Phoenix Down Pendant.

Finish Sal’s test by witnessing a Phoenix be reborn