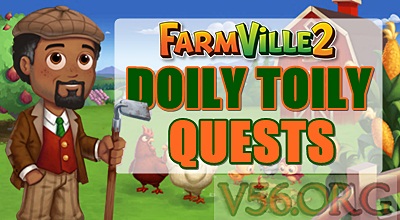 Get ready to  help Walter in Farmville 2 Doily Toily Quests. Today, the game will be having an update to release this Farmville 2 Quests and it will have a series of 8 missions to complete. The story is also associated with a new feature. We have just finished preparing this guide on how to complete this quests and so let’s begin!

Perform 5 helpful actions on Neighbor farms to help Walter out.

Feed 2 Adult Goats to keep them out of the flowers.

Gather 20 Water from Wells or a Water Tower

Quests 5: Truffle on the Double

Tend your Pig Pen 2 times to see if they have Truffles.

Harvest 20 Wheat before the Pigs trample it!

Quests 7: Icing on the Cake

Tend your Chicken Coop 2 times to see if they swiped the figs!