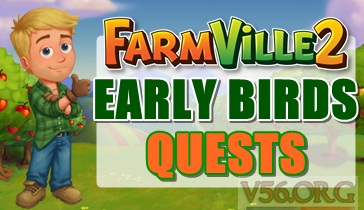 Farmville 2 and zynga is starting the new Farmville 2 Early Birds Quests on Tuesday, 04-29-2014 and it will have the usual 8 stage. The challenge for this Farmville 2 Quests is to help Gus in  raising baby birds while building the Early Bird Tree. This is a limited time quests and players will only have 2 weeks to complete all requirements. You may expect some crafting tasks so you might want to gather the materials early to prepare for it.

-To catch those worms, we’ll need some fake worms made out of latex! Let’s get some rubber!
Tasks:

Place Early Bird Tree for the birds to nest in.

Have your Sweetie do 1 Pearl diving job

-Let’s see how the neighbors are doing with their worm harvests. Come prepared for mud!
Tasks:

Use 3 Farmhands and ask ’em about worms.

-The science room in the local school needs somewhere to house their night crawlers. Something big and round?
Tasks:

Have your Sweetie do 1 Cave Exploring jobs

-Keep chickens occupied so they don’t peck the worms. And find a good use for the eggs!
Tasks:

Tend your Hen House 2 times to distract the chickens.

Feed 4 Adult Chickens to keep ’em away from the worms!

-Let’s relax on this hot day with some fine goat cheese and delicious drinks!
Tasks:

— To craft Heirloom Peach Lemonade you will need 6 Peach and 1 Lemonade.

-The kids won’t be picking up our worms if they play with reptiles instead! Make the teacher something nice too!
Tasks:

Collect 5 Fish Bowls for the school.

Feed 4 Adult Goats to stir up the dirt.

— To craft Custard you will need 2 Eggs and 1 Milk.

-Moles love worms so make sure to scare ’em off the farm so we can get the nightcrawlers first!
Tasks:

Tend your Sheep Shack 2 times to look for moles.

Feed 4 Adult Sheep to comfort them.

Make 3 Sheep Salt Blocks to keep the sheep from nipping you!

–To craft Sheep Salt Block you will need 3 Salt and 10 Corn.

Looking for other Farmville 2 Quests? try this PAGE.