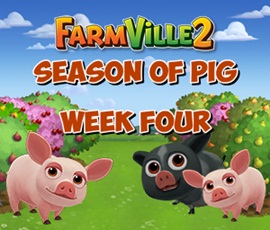 Farmville 2 Fourth Week Pig Season continues as new tasks will be unlocked for players to complete and receive rewards. The Pig Season is a 4 part Farmville 2 Quests where every week a new set of tasks are release and this will be the fourth and maybe the last one. The interesting thing about this unreleased Farmville 2 Quests is the Mud Wallow. The Mud Wallow maybe a new unreleased building for the farm. We will find out soon when they finally release this quest in the following days.

Make 5 Slips in the Crafting Kiln