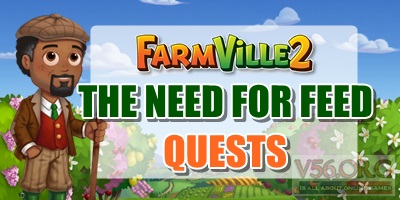 Hang around with Walter in Farmville 2 The Need for Speed Quests as he is wondering is there a better way to feed his farm animals faster. So in this Farmville 2 Quests we will help Walter to accomplish this while building the Farmville 2 Scale and Feeding Trough. There will be 8 stage of challenging task to complete and it will start from May 27, 2014 to June 10, 2014.

Feed 2 Adult Cows to get milk for Walter.

Feed 2 Adult Goats to get goods for Walter.

Make 2 Ornate Bells to put goats into a trance.

Quests 4: Farmville 2 Sneak Off to the Feed Trough

Make 2 Rope Mirrors to peek around corners with

Collect 5 Hoof Picks to care for the horses

Make 3 Alfalfa Sandwinches to feed yourself

Tend your Horse Stable 1 time to get leather saddles

Make 20 Leather out of saddles