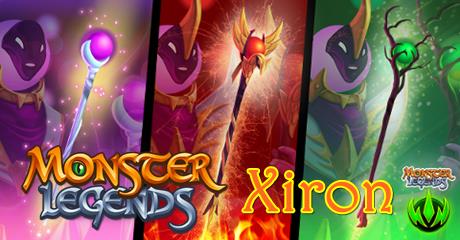 Here’s a back story about the new Monster Legend Xiron.

General Shannara was in the middle of a tough battle against the Metal army. She casted one of her world-famous anagrams, called Xiron, and she won the battle, but the anagram was so powerful that after hitting the enemies, it turned into a ball of Magic, which floated away from the battlefield and got lost in the horizon. 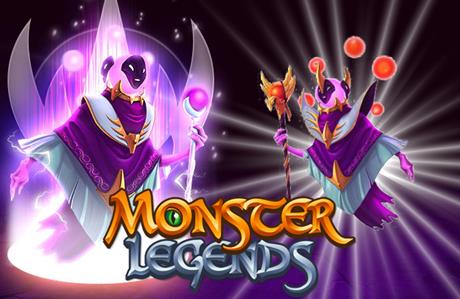 That ball of Magic travelled through the Multiverse for years, absorbing energy, information and power. IT got to a point in which it had gathered so much information that it became intelligent, and it started analyzing everything. Xiron didn’t understand the differences between good and bad, the meaning of feelings, but being nothing more than a powerful ball of Magic, it was fascinated by those things and, especially, by weaknesses. It wanted to experiment what monsters felt like and what feelings were, so it dressed itself up with a robe and started wearing masks to simulate expressions.

Now, Xiron is ready to interact and test the weaknesses of monsters, maybe even discover if it has one itself! The problem is that General Shannara isn’t exactly keen to see how one of her spells has turned into a monster that may have more power and devotion from the other Magic monsters than herself.

In battle, Xiron is just starting to discover its skills, but what it does know is that it can control its enemies in different ways: It can drain 100% of the stamina of a selected target, it can select another target and activate its cooldowns and, without exactly controlling it, it can deploy random control skills, like Stun, Megastun, Freeze, or Possession.

Depending on the weapon it carries, Xiron acquires different extra skills: The Magic weapon is damage oriented, the Nature weapon can Poison and Stun, and the fire weapon can Ignite and cast two different negative control effects.