Game Description: Supreme Destiny is a free to play Mythology-based MMORPG game developed by JoyImpact Co. Ltd in South Korea and published by Vibrant Communications Ltd. for international gamers. The game focuses on 2 rival kingdoms in a medieval setting that are fighting for supreme power. Much of the game encourages interaction and focuses on fast paced orientation and party system without the traditional tiresome leveling system. Also the game features a castle siege and guild war systems in the cities of Armia, Arzan and Erion that advances the guild systems. 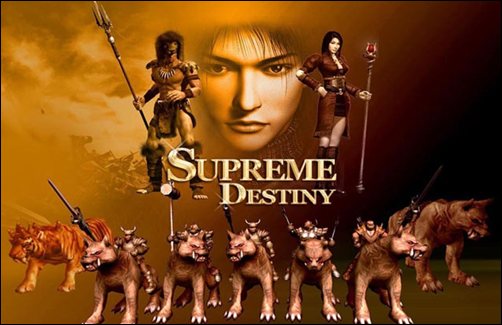 Trans Knight – A warrior of the divine order, The Trans Knight is gifted with “Area of Effect” (AOE) skills which enables him to easily take on even a mob of monsters. Trans Knight are the quintessential frontliners and tankers as they readily sacrifice what little life they have to inflict greater damage to enemies.

Foema – When it comes to unleashing the power of nature, the Foema has no equal. They have this uncanny ability to use their arcane mysterious skills in times of great need and many of their foes have learned of this the hard way.

Beast Master – is the master of summoning; elemental and natural powers greatly aid him in the battle field. He not only has the lethal weapons and enhancing spells at his disposal but also has ferocious animals like bears and dragons at his beck and call.

Hunter – Stalking her prey and inflicting a silent end to her victims is the hallmark of a hunter. Her capture skill has made her one crafty predator and her trade skills allow her to obtain cheaper prices and good deals from NPC merchants when selling and buying items.